We spent the day of May 7th with the aircraft and visiting journalists but also for final preparations for its arrival in . We are very grateful to PrivatAir who gave us great assistance at Le Bourget and to their employees who bent over backwards to help us. A large thank you also to two aircraft cleaning companies, Renotex and Skytech who, without asking, offered to wash down the aircraft free of charge.

We are very happy to see the effect that the Super Constellation has on people because this non-profit project would not exist without the help of volunteers. The airport of Le Bourget (ADP) also helped us by waiving their landing and parking charges. We would like to thank Aeroports de Paris as well as the Museum of Air and Space who hosted us at their parking and in their facilities. Our thanks also to the fire brigades of Le Bourget airport and of airport who greeted us with arches of water. 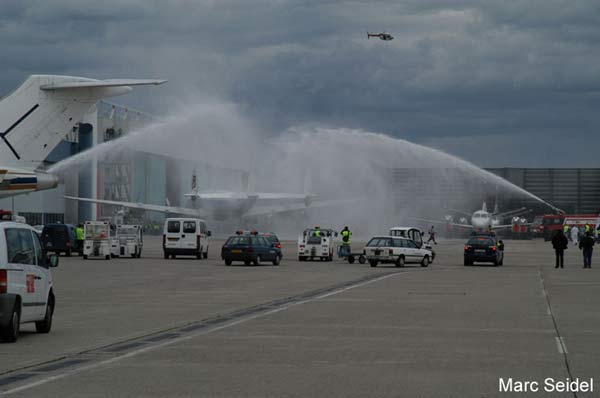 Our first reaction on waking on the morning of May 8th was to look out of the window. The weather conditions were horrible. The cloud base was low, it was raining and the wind was gusting up to 30 Kts. We were worried as the aircraft is no longer de-iced and we are unable to takeoff if icing conditions exist. We collected the latest information from the weather office and from aircraft landing or departing at and we learned that the freezing level was not too low but just above the lowest altitude for our routing. 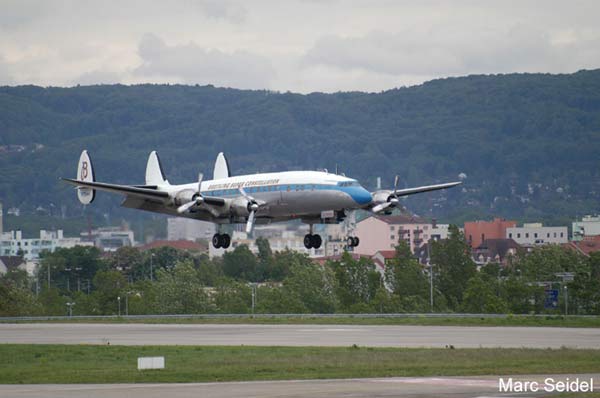 We took off from Le Bourget at 9:30am in front of many spectators and found Françoise on the radio. This air traffic controller had pre-arranged to contact us and we worked out with her the best route for the flight. We managed to avoid the icing by maintaining the minimum flight altitude and were in the clouds until 20Km from . There, the clouds miraculously dissipated and we were able to maintain a visual reference with the ground and airport. We knew that many people were waiting but circled for 20 minutes above the airport at the request of the organisers as many people were still queuing to enter and watch the arrival of the aircraft. We started the approach closely followed by a television helicopter and landed on Runway 26 in front of almost 3000 people. A cheer and much clapping saluted this first landing at the EuroAirport of Basel-Mulhouse. We extended the Swiss and French flags and taxied to the apron in front of several airliners which stopped to admire this beautiful bird. The firemen greeted us with an arch of water and we arrived at our parking place. We stopped the engines before being towed towards an impressive crowd only a few metres away behind the security barrier. Dozens of photographers and television cameras recorded the event. We could not quite believe what was happening, that our dream had been realised, that four years of determination, of patience, of perseverance and hard work had been rewarded. We savoured every moment. 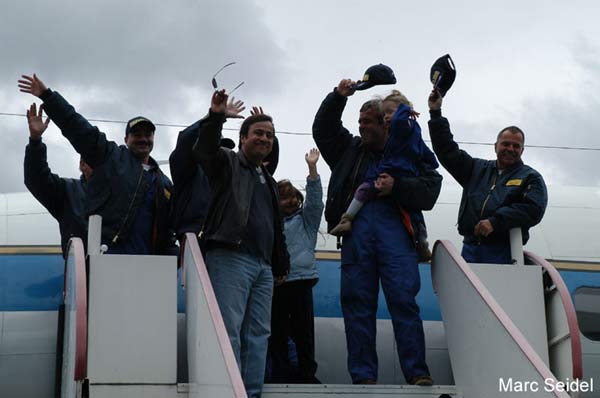 In the aircraft, the emotion reached its peak and we took time to enjoy it before opening the doors in front of the applauding crowd that greeted the return of this famous aircraft. We waved to the public who responded immediately with cheers. We were aware that this dream is also theirs and that we all have the good fortune and immense pleasure to have realised it. The brass band « Swiss Band » (ex-Swissair band) gave us a musical welcome. Several classic aircraft were parked around us, including two Junkers 52 and a DC-3, and an extraordinary car of the ‘30s.

Benny Younesi, the president of the « Constellation Historical Society » which had restored N73544 prior to displaying her on the air show circuit for several years, had come from to welcome us. We asked him to join us on the stairs of the aircraft, to share with him and his team the moment. We would like to thank all the supporters of the CHS who had restored and then maintained this aircraft during all those years. We are immensely happy to continue their project, along with the help of several pilots and engineers of the CHS who will pass on to us, during future years, their experience and knowledge of the Super Constellation.

We would like to very warmly thank « Swiss International Airlines » who graciously made available their buildings and facilities to us. We also thank all those who had prepared and then ran the event which has been a great success for the Super Constellation Flyers Association. So, we wish a very long life to the Super Constellation which has allowed thousands to realise a dream during these two weeks of travel and which will allow many others to do likewise during future years. Many children were present and we hope that this event will arouse dreams within some of them to become pilots. In the immediate future, it will cast a new light and bring a piece of the dream to a magnificent airport which has suffered from the disappearance of Swissair and Crossair. It equally brings some hope to Swiss, French and European aviation which greatly needs it.

We would like to remind everyone that this project is non-profit in nature and we welcome all assistance, volunteers, donations and sponsors who wish to contribute their support to this project of dreams and friendship.

Here are some of the future appearances of the Super Constellation. Seats on these flights are available only to members of the association.

Flights around the Alps are also planned and seats, which are reserved exclusively for members, will be available on the following dates :

Do not hesitate to contact your team for more information:

Email:      This email address is being protected from spambots. You need JavaScript enabled to view it. 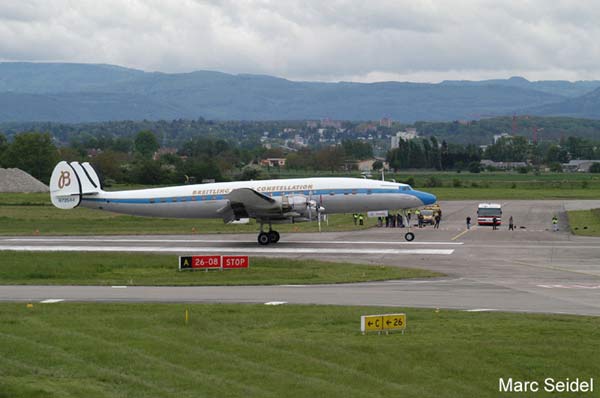 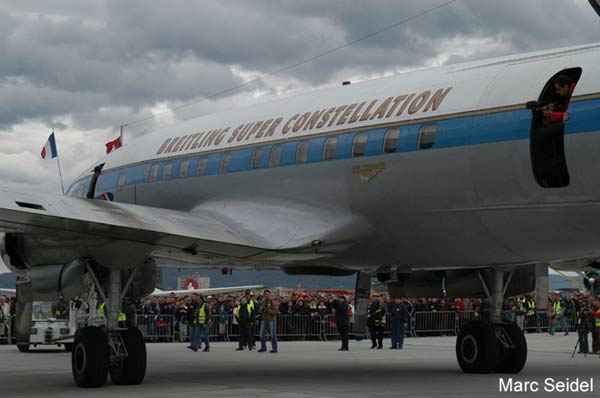 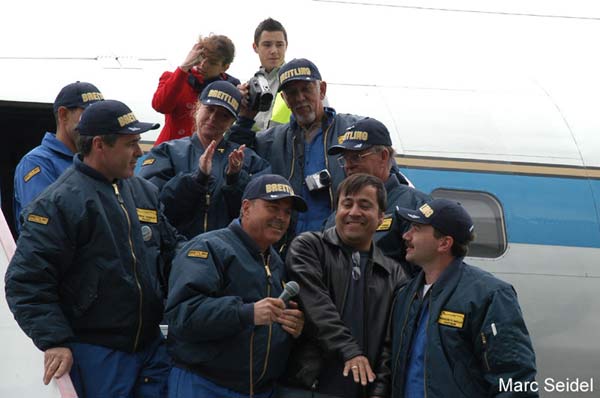 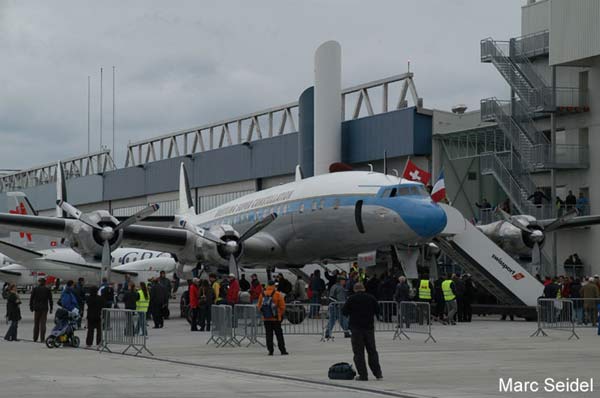