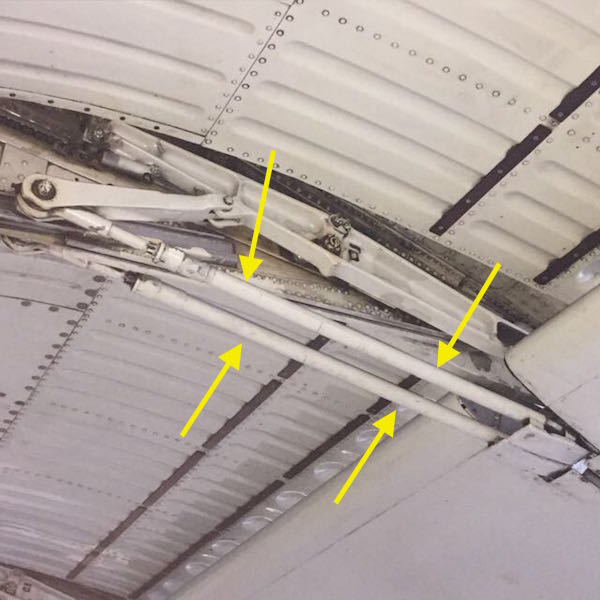 The start of the 2017 will be delayed for technical reasons. Flight cancellations include pilot/flight training in Dôle (France) which was scheduled to take place over the Easter holiday, as well as the first passenger flights to Dresden and Meiringen, along with the sight seeing flight "Basilea Grande". According to Arnold Freund and Werner Spichtig, the Breitling Super Constellation will not be ready to fly until the "RUAG" flight to Oberpfaffenhofen and Munich on May 19.

The reason for this delayed start of the flying season are 24 wing flap link rods; these rods allow for the symmetrical extension and retraction, as well as the stabilization of the wing flaps. The heaviest load is placed on the rods during the approach and landing phases, when the flaps are fully extended. Damage or breaking of the rods, even one individual rod, could lead to a state of flap asymmetry which in turn would result in the compromise of flight safety. During the overhaul inspection of landing flap components, corrosion was detected on the Super Constellations flap link rods. As a result, they will need to be replaced before the Connie can fly again.

Unfortunately, our efforts to find replacement parts were unsuccessful which means that we will need to produce the new rods ourselves. The decision to newly design and create the flap rods was made on March 13, too late for the Connie to be ready for flight training, or to launch into the 2017 flying season as scheduled.

The production process is time consuming; it includes drawing the rods, approval of the new blue prints by the Swiss FOCA (Federal Office of Civil Aviation), actual design and production of the parts. We expect this process to be completed by the middle of May 2017.

We apologize for this unforeseen delay, and we ask for your understanding. We are looking forward to welcoming you onboard one of our flights this year.